First, clean up the (tangible and mental) clutter before you start

“I still have the illusion that when I ask my 17-year-old daughter to do something, she will do it right away! But every time I ask her to do something, I often get disappointed. Apparently, we have to break through some sort of barrier to get to understand each other, before we can get started.

Similar with organizations, I so often see colleagues, change and project managers having the illusion that if they want to change an organization and plot the course of the change, the work floor will immediately comprehend, follow and move into action mode. But every time, I see them being disappointed, when things do not happen as they expect! What barriers do we need to break through, before we can actually start working? What to do to ensure a lasting embrace of change and improvement projects on the work-floor? How to create such acceptance and understanding that the work floor – by itself – feels involved, embraces the project and gets to work. Fact is, this apparently does not happen automatically!”

Clutter in your head

Kids in puberty want to do it, but often just don’t do it as we expect: for example: “Would you like to go buy a loaf of bread, 1 pack of milk and a piece of old cheese in the supermarket? “Sure, I’ll do that!” An hour later: “Have you already done the grocery shopping, I asked you to do?” “Oh yes, I’ll do that right away”. Eventually she will do the shopping but another 2 hours later. And I realize that the things I planned to do myself for that afternoon are already under pressure. Then my cell phone rings: “Yes, it’s me, I’m in the supermarket. What was it I have to buy again?”. Clutter in her head, wanting to be informed on all social media postings, being connected to all her friends all the time, doing homework, developing yourself, her left and right brain-lobe obviously not yet communicating optimally. This does not really contribute to a better self-esteem, optimal communication, the setting of goals and creation of executable action lists. “It is of course not really interesting, after all, you cannot miss out on all parties and stay in constant contact with all your app groups on your smart-phone”.

Clutter in your Organization

It’s often frustrating to experience, that also in our work environment, we get to deal with similar immature behavior, our kids in puberty so often display. Particularly when working in an organization which is undergoing continuous change, co-workers for some unexplainable reason do not connect and partake in ongoing improvement or change processes. Here too, there seems to be clutter in the organization. Not the tangible clutter. But a mental clutter or defocus, the type of clutter you do not see, frustrating improvements and causing the organization to make one step forward and two steps back. As such this clutter ensures that employees “go shopping in your organization”, because they have to get something done. But then, after some time they’ll often get back with the wrong stuff, ending up at your desk asking, “What was it again I had to get done or do?”

But how does clutter in our mind look like? Can we make this tangible, so everyone can understand it?

It is the clutter and defocus in the minds of all employees, managers and even often CEOs frustrating or disabling the connection between the different layers in the organization. And do not think that clutter does not exist in your organization, because it is omnipresent in every company or institution. In every organization large or small, there is an invisible undercurrent determining whether the organization is able to speedily adapt and embrace change and improvement or not.

Let’s summarize the invisible clutter strongly affecting the result of change and improvements projects in any organization? Here are some examples; 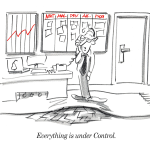 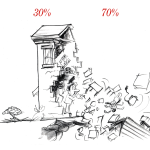 About raising kids in Puberty and Organization Change (Part 4)